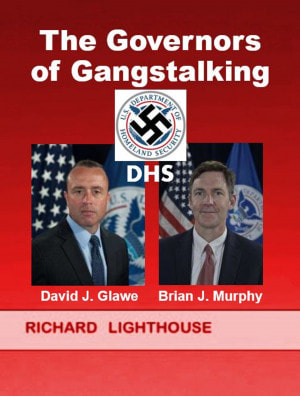 The Governors of Gangstalking

Rev 3C - This short ebook describes the leaders of the gangstalking program against Targeted Individuals in the United States. Their names are David J. Glawe and Brian J. Murphy. I was able to track down these two criminals, due to the brave efforts of police whistleblowers. During 2018, there were 3 police whistleblowers that stated the Fusion Centers were being used as Gangstalking control stations. The Intelligence & Analysis Office of DHS provides funding, training, free software, database and contact lists, and some of the key personnel for the Fusion Centers in the United States. I & A Office coordinates between the Fusion Centers and works with the Emergency 911 Call Centers in the United States, to block and redirect the emergency calls of Targeted Individuals. Many Targeted Individuals have experienced what happens when making a 911 emergency call and no ambulance arrives, or police arrive and mock you.

In my opinion, Secretary Kirstjen Nielsen and President Trump do not know about the criminal conduct in the DHS Intelligence & Analysis Office. Organizational charts, background information, and further research are suggested for readers. Targeted Individuals are encouraged to write or call the DHS Secretary and FBI agents - and tell them what is happening. Try to use different channels to contact them. It appears that the Office of the DNI and FBI's Counterterrorism Unit are also directly involved. Write to your Senators and Congressmen. Talk to your State legislators. Email your City Council members and Medical Doctors. I have provided a long list of contacts at the DHS – please contact them, or if you are in the Washington DC area, please hand-deliver messages and leave flyers on their cars.

In my opinion, Glawe and Murphy have committed acts of High Treason against United States citizens. Under the U.S. Constitution and Federal Law, a judge can deliver a death sentence to these government officials and each of the employees in the DHS Intelligence and Analysis Office. A lifetime sentence in prison, without parole, is also a possibility for them.

The last know address for David J. Glawe is

Please print this document for distribution – the government criminals are tracking it electronically.

DHS addresses in Washington DC – pleaseleave flyers on the cars: