Brief  Discussion  on  the  Nature  of  Time

If our universe is blinking a trillion times each second, then how does time actually work?  And why do we perceive sequential time, where one event follows a seeming cause and effect? This short ebook describes how time actually works, and what makes it a coherent illusion. First, all of time is simultaneous.  There is no backwards or forwards with time.  When the universe blinks on, each cycle - all of time and space is newly constructed, with particles that did not exist one second ago.  Sequential time is an illusion that has to do with the nature of perception and the ego.  In our terms, the MASSIVE PRESENT MOMENT contains all of time, every second of every year, past, present, and future.  When you travel thru time, you do not travel backwards or forwards.  Rather, you are moving "sideways" across parallel timelines, that exist within the present moment.  For those that want to solve the famous paradox, killing your grandfather in the past will not change your current reality, because for each person, there are a near-infinite number of probable timelines that exist simultaneously.  It is impossible in practical terms, to eliminate all of the probabilities.   #blinkinguniverse

No part of this publication may be reproduced, stored in a retrieval system, or transmitted in any form or by any means, electronic, mechanical, photocopying, recording, scanning, or otherwise, except as permitted under Section 107 or 108 of the 1976 United States Copyright Act, without the prior written permission of the Copyright holder.

Limit of Liability/Disclaimer of Warranty: While the author has used his best efforts in preparing this document, he makes no representations or warranties with respect to the accuracy or completeness of the contents and specifically disclaims any implied warranties or fitness for a particular purpose. Opinions of the author are expressed. No warranty may be created or extended by sales representatives or sales materials. The author shall not be liable for any loss of profit or any other commercial damages, including but not limited to incidental, special, consequential, or other damages.

About the Author:
Many of my ebooks can be found for FREE at: Smashwords.com, Apple iBooks, BarnesAndNoble.com, and other websites. My website is www.RLighthouse.com

One of my favorite quotes is from Seth, "...you have no idea of the difficulties involved in explaining time to someone, who must take time to try and understand the explanation.”
Session 14, 1964.

When our universe blinks off, then the universe of antimatter blinks on. During the antimatter part of the cycle, we do not physically exist. Our consciousness exists, but not our physical bodies or the physical universe. Again, this happens more than 1 trillion times each second.   You are "Not here" just as often as you, "Are here."

You do not focus on the blank spaces, anymore than you would focus on the blank spaces in a movie reel. Keep in mind that a movie reel runs at about 30 frames per second, and you perceive a continuous moving image, but that is a illusion. Nothing is moving within a single frame, as it is a stationary picture.  Technically, there is motion within a "single frame" of our universe - but that brief moment of sequential time is limited to one trillionth of one second.  And the maximum motion within a single frame, due to the speed of light -  is 0.27 millimeters.  (This is approximately the thickness of your smallest fingernail.) 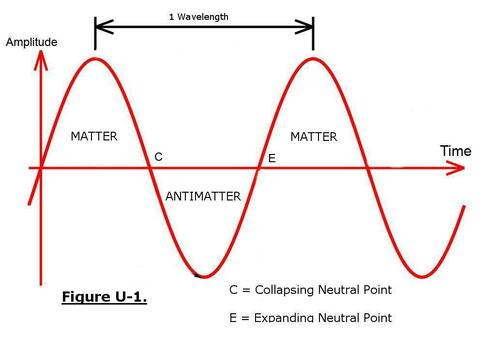 Fig 1.  Blinking cycle of our universe.

Fig 2.  Movie reel with blank spaces between the frames.  You do not perceive the blank spaces.

The massive present moment contains all of time, every second of every year, past, present, and future. When you travel thru time, you are moving "sideways" across parallel timelines, that exist within the present moment.

The dinosaurs are alive and well in the present moment, and you can travel "sideways" thru time to meet them. That universe of 70 million years ago, exists now, in the space around you.  The universes "overlap" each other and reside with the same space, in our terms.  All of these time periods are available and perceived by your subconscious mind. However, the ego filters out all of these realities, except for one – that is the one you experience. And that is the primary purpose of the ego - to keep you focused in one reality. Your ego filters out the other realities because you would be overwhelmed to directly experience the simultaneous, multidimensional universe. Our conscious awareness simply cannot handle that much input at this stage of our development.

As you develop your state of consciousness, you will one day be able to perceive large segments of time and many realities, simultaneously. This does not mean that you cannot do this now, because you are not fundamentally limited in any way. But we must all learn to develop and use these natural abilities.

Each person has available to them, a near-infinite number of probable timelines. Every time you make a simple choice or decision, you move to a new timeline of probabilities, in our terms.

In scientific terms of physical matter, THERE IS NO CAUSE AND EFFECT, because the universe is newly constructed of new particles each time – so that the current physical “effect” cannot be connected to any previous “cause.” Your mind and consciousness are the connecting link between each blinking cycle, not any physical matter. Your conscious mind perceives a continuous flow
of events, but the physical matter is not connected between each blinking cycle. Again, this is somewhat like the frames within a movie reel. The individual movie frames have no motion within them, but you perceive continuous motion with your mind, if the frame rate is greater than about 20 frames per second.

Albert Einstein's assumption that the speed of light is constant, has caused many problems in the scientific community.  I won't go into the details, but I will refer interested readers to NASA scientist, Dr Daniel Gezari's important technical paper in 2009 titled, “Lunar Laser Ranging Test of the Invariance of c.”  Using the latest technology and extremely precise measurements, it is clear that the speed of light is not constant. This has huge implications for science and math.   It is increasing about 3 meters per second each year.

So the universe literally blinks, off and on, a trillion times each second, which is a very high frame rate in our terms. Even the latest scientific instruments have difficulty detecting this.

I recently had a number of scientific people (on Linkedin.com) claim that, we cannot reside in a blinking universe at 1 trillion cycles per second, because we measure many things that blink much faster than this rate. This is a simple misunderstanding. The blinking frequency of our universe (the Lighthouse Frequency) is not an upper limit for reality.  We can measure and see light, for example, at a frequency of about 400 THz.  I can also direct a handheld laser pointer thru the movie reel that is moving at 30 frames per second, and the light will be visible on the wall.  The 30 frames per second (30 Hz) is not an upper limit for the laser light, otherwise we would not see any light. So the blinking frequency is not an upper limit for any perception or measurement. Another example, when you talk into a rotating fan that is turning at 100 Hz, your voice at 3000 Hz is not eliminated by the 100 HZ, as though it were an upper limit. What you hear is a stuccato of your voice, but there is no upper limit imposed by the 100 Hz.

To measure the blinking frequency, we must “tune” into one of the harmonics, much like a radio dial.

To understand just how fast one trillionth of one second occurs, consider this:  When moving at the speed of light, in one trillionth of one second, a photon will travel about 0.27 mm.  This is approximately the thickness of your smallest fingernail.   Again, this is at the speed of light (186,000 miles per second). This is the maximum distance that can be traveled in physical reality, within a single blinking cycle. There is no motion within a single frame of a movie reel.  But within our physical universe, true motion is limited to about 0.27 millimeters.  And the maximum amount of sequential time that can occur, is about one trillionth of one second.   This is the true nature of time.

1. Seth (Jane Roberts) Early Sessions, Book 2, Session 60, 1964. “Matter is continually created, but no particular physical object is in itself continuous... No particular physical particle exists for any amount of time. It exists and disappears, and is instantaneously replaced by another.”

2. Seth (Jane Roberts) Unknown Reality, Volume 1, Session 684, 18 February 1974. “The world literally blinks off and on. This reality of fluctuation in no way bothers your own feeling of consistency, however. The "holes of nonexistence" are plugged up by the process of selectivity.”

[Author's note: The holes of nonexistence are equivalent to the spaces between frames in a movie reel. See Figure U-1. In our terms, this is when the universe of antimatter blinks on.]

3. Seth (Jane Roberts) Early Sessions, Session 135, 1965. "Such electrical realities then, through the strength of their intensities and their particular range, are projected into some fields, but not projected into others. Any so-called travel through time involves then a traveling through such intensities.”

5. Richard Lighthouse, Preliminary Investigation into the Nature of Time, lulu.com, 2010.

8. Daniel Gezari, Lunar Laser Ranging Test of the Invariance of C, National Aeronautics and Space Administration (NASA), 2009. Value of c determined to be 299,792,658 +/- 10 m/sec. [different than the traditional constant value, which is 299,792,458. These measurements were taken with the latest technology and used extremely precise methods.] 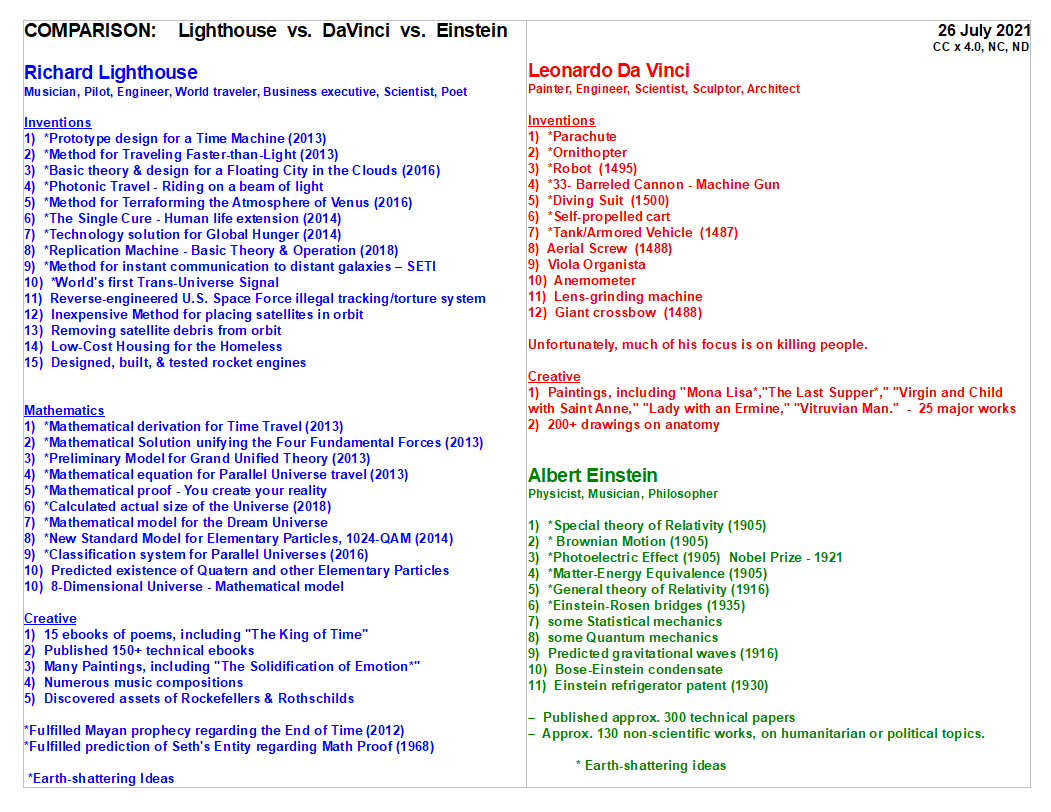