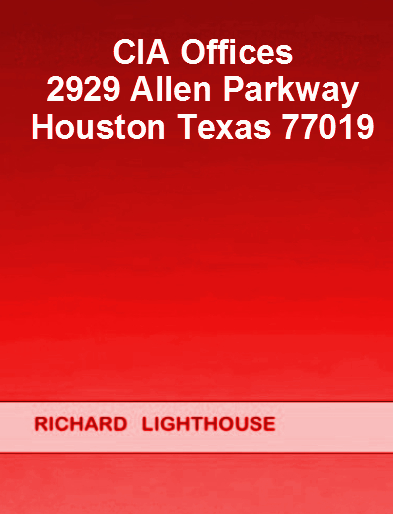 Revision H: CIA Offices located at 2929 Allen Parkway, Houston, TX 77019. As a journalist, this information is provided as a public service. Notice the excessive building security - worse than airport security. Look for vehicles in the parking garage with dark tint windows, especially the front windshield. Look for many stickers on the front windshield. Note that the Federal Government owned about 80% of the AIG corporation, after the mortgage collapse of 2008. Many CIA agents are residing in the Camp Logan neighborhood (zip code 77007) at taxpayer expense. These homes cost up to $1MM. (1) In this neighborhood, they prefer homes with iron gates & fences. (2) Watch the mail & package deliveries (3) “Street joggers'” and “repairmen” are used as Security Guards (4) Data signal sent from roof of AIG Building – 2929 Allen Parkway. Numerous authors and bloggers have identified the connections between corruption at the CIA, FBI, and NSA, and the Council on Foreign Relations (CFR). The CFR has been called the Shadow Government. According to President Bill Clinton in 1994, “There is a government within our government, and I do not control it.” At least one author has called their activities,Treason. They have been involved with murder, torture, kidnappings, drug smuggling, weapons deals, the funding of ISIS and Al-Qaida, numerous false-flag operations, bribery, threats to government officials, etc. Information is provided is this ebook documenting the CIA and FBI involvement and planning of the 9-11 events. Additional information on some of the murders committed by the CIA and FBI are provided. This information is being released due to the accurate information about CIA Satellite Terrorism provided by Dr Barrie Trower, former British intelligence agent, and Dr John Hall, M.D. See their youtube videos. The Council on Foreign Relations are the real terrorists, using the CIA , NSA, and FBI to do their dirty work. Readers are encouraged to review this information and make informed decisions.  According the Ted Gunderson, former FBI Chief - "The CIA and FBI are behind most, if not all terrorism."