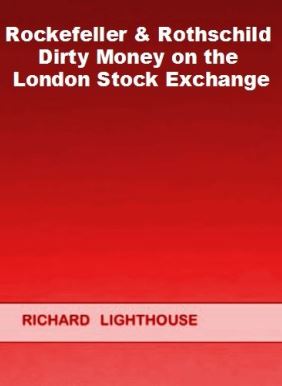 SKU: 9781370630073
$0.00
Unavailable
per item
Lloyd's Banking Group is probably the largest corporation in the world, with a global market capitalization exceeding $2.4 Quadrillion USD, according to Yahoo Finance. This company was formed in 1995, but based on its financials, it appears to be hiding trillions of dollars in
assets. The total market capitalization of the stocks listed on the London Stock Exchange as LLD2, LLD5, LLD6, and LLD7 are quite large. In fact, it is larger than all other banks in the world combined. Think about that, because it bears repeating – One bank in London has
more assets and value than all other banks in the world combined. It is at least 100 times larger than the next largest bank – JPMorganChase. $2.4 Quadrillion dollars is enough money to give every man, woman, and child on our planet, about $324,000.00 each. And still have money left over. That's enough money to solve global hunger. That's enough money to cure every disease. That's enough to provide good housing for everyone on the planet. And this is all held in one bank in London. So why is the London Stock Exchange trying to hide the value of these bank stocks? If you research this, you will find the value and number of shares of these LLD stocks are being altered on the internet. Other companies include Toyota TYT, Mitsubishi Electronics MEL, All Nippon Airways ANA, Ferrovia, Ricoh, Konami, and others. The financial information about these companies does not add up.

David Rockefeller, Jay Rockefeller, Jacob Rothschild, Evelyn Rothschild, David Rothschild, Nathaniel Rothschild. Please read "The Money Mafia" by Paul Hellyer, former Acting Prime Minister of Canada and Defense Minister. One of the things that Mr Hellyer could not explain in his book – where did the Rockefellers and Rothschilds hide their ill-gotten money. Most of these companies are required to file official documents with the Securities and Exchange Commission (SEC) each year. These criminals can be charged with Felony Fraud under the Foreign Corrupt Practices Act (FCPA). Readers are encouraged to research these companies and help identify the fraud. Please help us bring down these criminals. The day that this ebook was published, the criminals hacked and altered the yahoo website by deleting the listings or values for LLD2, LLD5, LLD6, and LLD7; but there are other ways to document the true stock listings. Reference biz.yahoo.com/p/410mktd.html