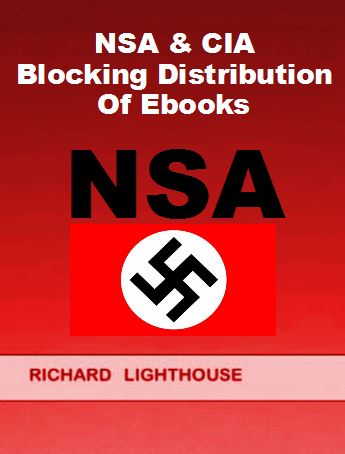 This short ebook documents coordinated criminal activity by the CIA and NSA. This is my opinion. After providing compelling technical information on the latest technologies, these criminals decided to block as much distribution as possible. Examples are provided from Google Play, Smashwords, Amazon, Fnac, Kobo, Overdrive, Easons, and Youtube. There is a clear pattern among numerous websites, that ebooks by Richard Lighthouse are being blocked, prices are being changed, and false information is being used to cover it up. This seems to have accelerated in August 2015. There is evidence that Amazon and their international affiliate websites are also deliberately blocking the distribution of ebooks by Richard Lighthouse. It is noted that Amazon recently signed a $600 million dollar contract with the CIA to provide computer services, including secure cloud storage. This is a coordinated effort and there is only one organization that could hack the Google and Amazon servers on a regular basis – the NSA. In my opinion, the CIA is involved because they are trying to control the technology that is described in my technical ebooks, particularly where distribution involves foreign countries.