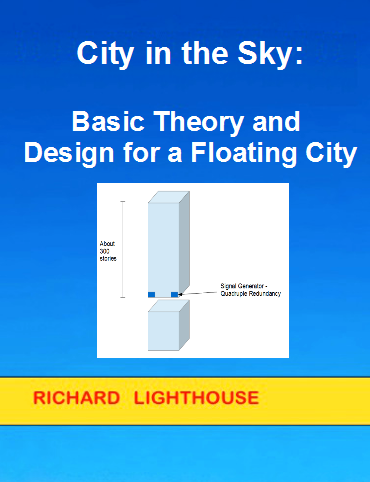 City in the Sky: Basic Theory & Design for a Floating City

This short technical paper describes the basic theory and design for floating cities in the clouds, which have been described in numerous science fiction books and movies. Any structure or object can be made to behave as though it

were essentially massless. This is done by synchronizing an electrical signal on the surface of the object with the blinking frequency of our universe (Lighthouse Frequency) which is 1.039 THz. Imagine a sine wave split by the x-axis with the

top half representing matter and the bottom half representing antimatter. The xaxis being sequential time, in our terms. Each time the sine wave crosses the x-axis, all fundamental forces collapse to zero (representing the single point of the Electrical Universe). When we synchronize an electrical signal with the sine wave, just before crossing the x-axis, all objects and structures will behave as though they are massless. Note that this feature explains the Hutchison Effect, which is basically operating at a harmonic of the Lighthouse Frequency.

The Hutchison Effect has demonstrated “levitation” many times. Each reader must comprehend that our physical universe literally blinks off and on, more than one trillion times every second.