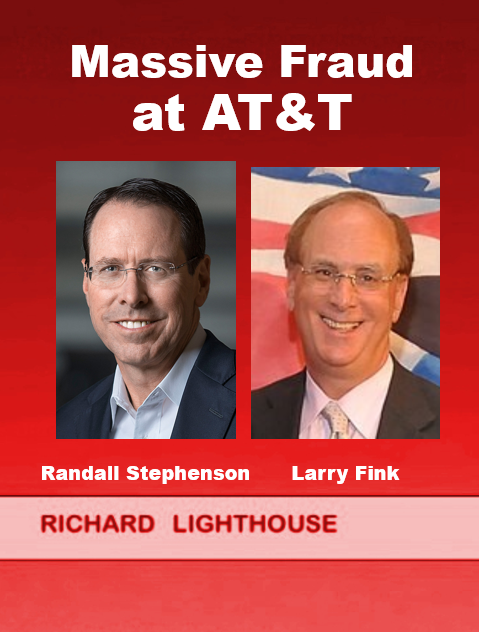 Rev 1B - This short ebook describes the massive fraud that is happening at AT&T, under the leadership of Randall Stephenson. AT&T received a contract for $6.5 billion to provide a nationwide system for first responders, including police, ambulance, fire, sheriffs, and FBI.

This system will be used to inform first responders, not to help Targeted Individuals.

One of the primary beneficiaries of this fraud is the Blackrock Corporation under Larry Fink, that owns $14 billion in shares of AT&T, which is one of the largest cell phone operators in the world. AT&T has allowed their cell towers, equipment, and antennas to be used as part of a weapon system against Targeted Individuals in the United States. The technology that creates a microwave beam and can be directed at someone – is called, digital beam forming. Targeted Individuals know that it can be excruciatingly painful and constitutes torture on a daily basis.

AT&T is one of the cell phone operators that are participating in these acts of Treason against U.S. civilians. Treason is defined under U.S. law and is punishable by the death penalty.

The AT&T antenna system can also be used to direct subliminal messages at anyone, 24 hours/day. The main system involving satellites and cell towers is controlled from Schriever Air Force Base in Colorado. AT&T executives are aware of the program and the use of their antennas. Randall Stephenson and Larry Fink at Blackrock, are both members of the Council on Foreign Relations (CFR). At Targeted Justice, we have received emails indicating that a large, well-organized gangstalking campaign exists within AT&T – supposedly to enforce a system of silence and secrecy.

Home addresses and the names of relatives are provided, for some of these corporate executives. This is not doxxing. This information was obtained from public sources that have been available for more than 10 years.