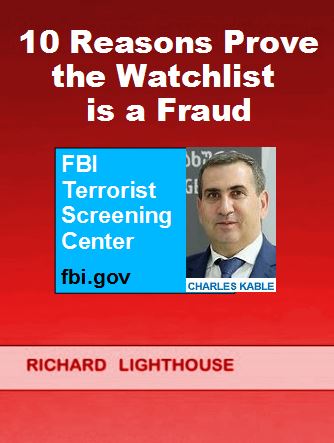 10 Reasons Prove the Watchlist is a Fraud

The Terrorist Watchlist is supposedly used by the National CounterTerrorism Center and the FBI to track global "known or suspected terrorists." Unfortunately, that is a lie. The majority of names on the Watchlist are Targeted Individuals, not terrorists.

1) In 2012, the State Department did extensive research for each country, estimating the maximum total number of terrorists worldwide at 184,000. This same year, the Terrorist Watchlist, run by the FBI claimed nearly 1 million name records, worldwide. Note that the State Department has thousands of employees that reside in these foreign countries that have access to the local people, local events, and local politics. The FBI has very few, if any, employees located in these countries.

2. How is it possible that the FBI has the names, addresses, driver's license information, names of family and friends, etc., while the State Department can only roughly estimate the numbers of "known or suspected" terrorists? The State Department also has access to the same Watchlist - so why are the numbers very different? Who is lying and why?

“To share the private information of citizens and non-citizens with corporations is illegal and outrageous,” said Attorney, Nihad Awad.