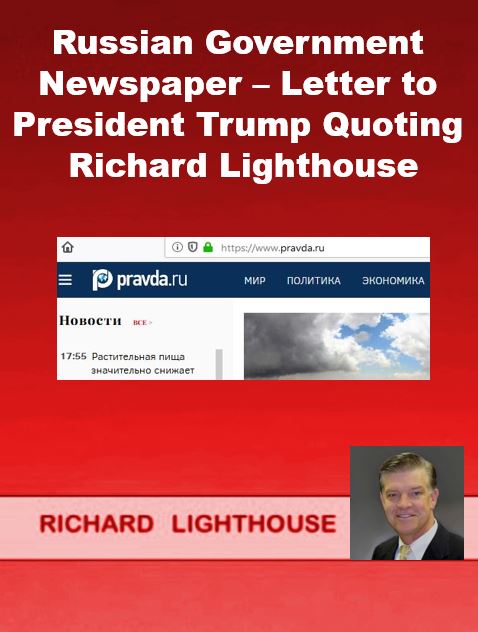 This short ebook documents criminal activity of the Clowns, Idiots, and Assholes (CIA) which has been classified to hide its discovery. This constitutes a violation of Presidential Executive Order 13526, which prohibits the classification of material to hide criminal activity. On 18 January 2017, Richard Lighthouse was quoted in the newspaper, Pravda, which is the official government newspaper in Russia. This is significant because the entire contents of Pravda are considered foreign intelligence gathering for the CIA. A few days earlier, my Internet Protocol addresses for my iphone, home computer, and work computer were all routed to a company, Incapsula, to use their technology to hide my IP location by automatically changing it many times each day. There are three companies that were ordered to do this simultaneously – MetroPCS (a subsidiary of TMobile), Comcast (work computer), and AT&T (home computer). When three large companies do something at the same time – you can be certain they were ordered to do it. So how do we know the CIA ordered this? Because under Presidential Executive Order 12333, only the CIA has the authority to act on foreign intelligence, and the reason they ordered this before publication, is because they knew it would be published. This proves the obvious – that the CIA hacked the emails servers of Pravda, a long time ago.

Pravda is not operated like a commercial newspaper in the United States. It is a government bureaucracy, that must get approvals and edits on anything important that is published. The article that I am referring to – took weeks to draft and circulate for approvals and changes. This is what gave the CIA plenty of time to know that it would be published soon, and gave them plenty of time to hack my phone and computers.  I have filed complaints with the Federal Communications Commission (FCC), and they have failed to investigate or directly respond to my complaints as yet. MetroPCS has responded twice, but failed to answer any of my questions. This suggests MetroPCS has been served a National Security Letter (NSL), in violation of Executive Order 13526.