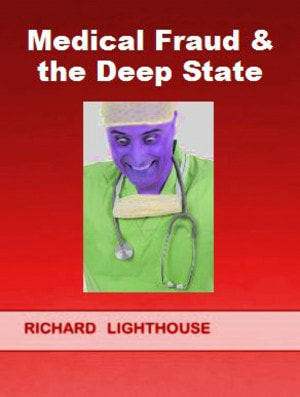 Rev 1B - This short ebook provides some specific examples where the CIA and Deep State are using medical fraud to cover up their extensive use of microwave weapons and implants on the civilian population. Almost everyone in the United States is being tracked and attacked by microwave weapons. The use of illegal and non-consensual implants is an outrage. It is a serious violation of the U.S. Constitution and Article 32 of the Geneva Conventions. The technology involved in these implants is far ahead of the technology information that medical doctors and nurses receive in their training, and most are unaware that this is happening. Most of the fraud is classified at the Top Secret level, due to its illegal application.

This is a serious problem that affects Targeted Individuals and the general population. The U.S. Air Force Space Command at Schriever Air Force Base operate the microwave weapon systems that track and target almost everyone in the United States, and a significant percentage of the population worldwide. The CIA Operations in Denver provide the funding and control of this illegal program.

In my opinion, some examples of this medical fraud are:

1. Tinnitus - a condition that primarily results from exposure to microwave attacks on the brain. The high-pitched ringing is noticeable to anyone that will sit quietly in a low-noise environment. There are numerous magazine and internet advertisements that purport to treat this condition. Based on the number of people that are effected by it, this is an obvious and massive cover up, and it confirms the massive scale of the CIA's microwave weapon attacks.

2. Tardive Diskenesia – this is a bogus medical diagnosis that attempts to cover up muscle twitching and other biological effects of microwave attacks and implant manipulation. www.TalkAboutTD.com

3. Theraworx.com - In my opinion, this is bogus external cream that is supposedly applied to prevent muscle cramps. The cramps are more likely the result of microwave attacks and illegal implant manipulation. Dr Drew Pinsky of the CIA-controlled media, has been appropriated to give it credibility, in my opinion. Any reasonable scientist can quickly recognize the misinformation in these commercials.

4. Nugenix Total T - a nutritional supplement that supposedly adds testosterone to the blood stream. In my opinion, these supplements are ineffective, and directed at older men and have additives that essentially degenerate and/or sterilize the male reproductive system. The reduction or elimination of male reproductive health is a high-priority for the Agenda 21 and globalist population-reduction goals. The advertisements are presented in a way to appeal to the inferiority-complex of some men.

5. Prostate supplements - many, many companies are involved in the toxic poisoning of the male population, which is part of Agenda 21 and the David Rockefeller plan for population reduction.

There are many other examples of medical fraud that attempt to cover up the use of microwave weapons and illegal implants on the civilian population. Many millions of dollars are spent on the high-profile advertisements on television, internet, and magazines. The CIA and Intelligence Community (IC) refers to this as “unconventional weapons.” These examples demonstrate how massive this illegal CIA program has become.

Readers are encouraged to be aware of similar examples in the medical community and to report these criminal actions to your state Attorney General, and elected representatives.