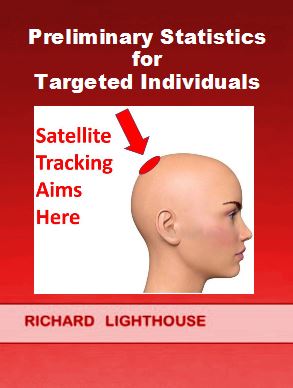 Rev 1B - This short ebook contains the best available statistics and data that the team at Targeted Justice has been able to collect from Targeted Individuals. It provides approximate answers to the percentage of Targeted Individuals that are experiencing V2K, Directed Energy Weapons, Organized Stalking, and Synthetic Telepathy. This author has previously estimated there are about 170,000 Targeted Individuals in the United States and more than 1 million worldwide. From the 746 members in this survey, about half answered these questions, and we have the following summary:

V2K means Voice-to-Skull. Working with Targeted Individuals is not a routine or trustworthy relationship, due to the nature of the targeting. We are grateful to those that participated in this effort. Targeted Justice continues to work towards resolution of these horrendous crimes, and we welcome your input and suggestions.

This data is summarized from a membership list of 746 member applications, December 2017 thru October 2018. We cannot guarantee that shill data and/or shill members do not exist within this data. However, we also have no evidence to suggest that it is a significant effect within the data fields. About half of the members have voluntarily provided answers to the simple questions. No one's application was denied for failing to provide answers.

I have labeled this data and summary as preliminary because it has not been collected under ideal conditions. It is possible that no one will be able to reasonably obtain high-quality data from this group, because of the nature of the targeting. Some of the answers are based on the perceptions of the individual, rather than specific or measurable facts. However, this is relevant, because the individual is then reacting to future events based upon the perceived technology.

Synthetic telepathy is difficult to explain because it is so easily dismissed by outsiders. Yet the majority of Targeted Individuals clearly believe that it exists. In my discussions with Targeted Individuals, their understanding of Synthetic Telepathy is – the ability to read your mind using technology, including seeing thru your eyes, hearing thru your ears, and feeling what you feel. Again, this is my opinion, and no statistics were gathered on the interpretation of the question. It is an area for future researchers.

One of the best conclusions that can be drawn from this research is that, in spite of the enormous power of this technology, it is clear that the CIA cannot control people on a mass scale. If they could, then Hillary Clinton would have been elected President, and Putin would have turned over Russia to the Deep State. If the CIA was able to control a large mass of people, every gun owner would have already surrendered their guns and gladly fell in step behind the CIA criminals. But it has not happened. The technology can be used to influence and manipulate on a mass scale, but not control. I will refer readers to my previous ebook on the “Manipulation of Secondary Personalities.”﻿