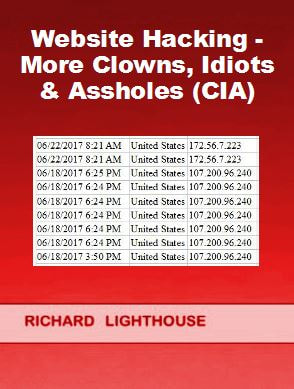 Rev 1E - The CIA and NSA continue to stalk, harass, and hack the websites of TargetedJustice.com and RLighthouse.com. This short ebook documents the continued illegal hacking by the CIA and NSA. This illegal hacking includes up to 6 simultaneous logins into the account, apparently for watching whatever we do.

Readers will note there are three logins during one minute, for most login events. The 3 combined logins indicate a mirroring or redirect event is occurring, or possibly both. Although, there are instances with only one login event. We can assume those are events where the government criminals logged into the website, to alter something or plant malware.

The pattern of IP addresses is important, as it can indicate which criminal organization is involved. TargetedJustice.com has usually been accessed from 3 locations – Houston, Texas Barstow, California, and Pacifica, California. Some of these IP addresses are very far from these locations – which indicates manipulating or altering of the IP address.

The sworn affidavit of William E. Binney, former Technical Director of the NSA, is referenced to prove that the NSA and other government agencies are behind this hacking. Ed Snowden is one example of a CIA officer that was hidden inside the NSA.