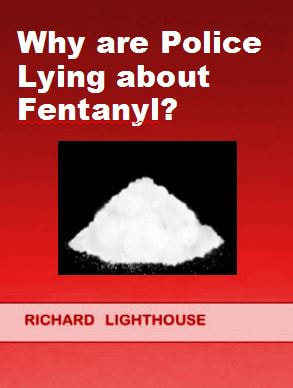 Why are Police Lying About Fentanyl?

This ebook documents some of the criminal activity at the Harris County Sheriff's Office and the lies that were issued by Sheriff Ed Gonzalez on 26 June 2018. Among them, the Sheriff claimed that merely touching fentanyl can cause you to overdose. Many Medical Doctors and Pharmacists have stated, this is nonsense and impossible.

The Drug Enforcement Agency (DEA) has been claiming for years, that opioids, such as Fentanyl, can cause an overdose by simply touching them. Now, the real question is – why are the DEA, Police, and Sheriff's Office repeating an obvious lie, when anyone can easily research it on the internet, and determine it false?

What do Doctors think?

“Overdosed by touching fentanyl is nonsense.”

"There is NO WAY a significant amount of fentanyl is going to be absorbed thru the skin with casual contact."

"Instant overdose from this powder? Not even remotely possible. My hand has been covered in liquid Fentanyl...no symptoms."

“Fentanyl, applied dry to the skin, will not be absorbed. There is a reason that the fentanyl patches took years to develop,” [because they are difficult to absorb thru the skin].

“The American College of Medical Toxicology has drafted a position statement about the possible routes of fentanyl exposure, debunking the likelihood that transdermal fentanyl absorption is clinically significant.”

– Dr David Juurlink, M.D., toxicologist at the University of Toronto

The opioid addiction is a real problem in America, and this is confirmed by the record opioid profits at Big Pharma companies. The country of Afghanistan, currently occupied by U.S. troops, continues to produce record amounts of poppy fields (heroin and opioids), and these poppy fields are guarded by U.S. troops, day and night. The murdered journalist, Gary Webb, proved that the CIA was controlling a majority of the drug traffic in North and South America, in the 1980's. The CIA continues to traffic drugs globally and this has been well-documented by many journalists and authors.

Is there a larger false flag operation, involving opioids being planned?

A recent incident in Houston, Texas, had the Harris County Sheriff's Office claiming that one of their deputy's had absorbed Fentanyl by merely touching a contaminated flyer. This statement was repeated many times by the Sheriff, his legal counsel, other Deputies, the Houston Police Department, and the Precinct Constables. There were Haz-Mat teams and a huge show put on for the television cameras. The story was carried by hundreds of television stations and the mainstream media.

Who or what is behind this factory of lies? It is a well-known fact that the CIA controls a significant amount of the global drug traffic. This fact has been documented by credible journalists and authors, including Gary Webb and Michael Ruppert.

According to journalist, Keri Blackinger, the Harris County Crime Lab has repeatedly stated that you cannot absorb Fentanyl by merely touching it. And this information has been given to the Sheriff's Office and the Houston Police Department. So why are they lying about it?

Gary Webb was a journalist that discovered the CIA's control of drug traffic throughout Central and South America. He was found with 2 gunshots to the back of his head and the Sacramento County Coroner claimed it was suicide.

“The CIA and FBI are behind most, if not all terrorism.”

“We'll know our disinformation campaign is complete, when everything the American public believes is false.”

“There is no question in my mind that people affiliated with, or on the payroll of the CIA, were involved in drug trafficking.”