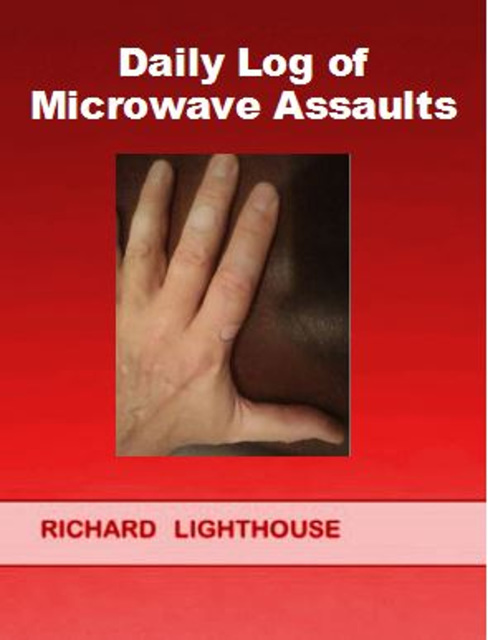 Rev. 2A - Assault and Battery is a serious felony crime, and yet it happens on a daily basis to Targeted Individuals. This ebook provides a log that is typical of many Targeted Individuals. It shows how cell towers, satellites weapons, and MQ9 drones are used to attack and harm people that have done nothing wrong. Military microwave weapon assaults are also a War Crime under Article 32 of the Geneva Conventions, and under Rule 92 of International Humanitarian Law, they are considered a crime for prosecution by the International Criminal Court (ICC).

Almost everyone in the United States is being tracked with microwave weapons from cell phone towers and satellites. This is not a joke. The microwaves cause brain damage, including memory loss. The CIA and USAF Space Command have been involved in a massive, illegal operation to track and attack almost every person with subliminal messages. The microwave pulses have a similar effect to ECT electroshock treatments and symptoms that are similar to a brain concussion. More of the population will awaken to the threat that these microwave attacks represent.

I began to keep a log in February of 2018, with the intention of publishing it, to help others understand what the targeting involves. I stopped keeping a daily log when I realized that the longer I maintained it – the more intense the government criminals were making the assaults. They did this, because they knew I would publish the material eventually.

The goal of the CIA is to frighten and discourage whistleblowers within the CIA and other intelligence agencies. However, I encourage government agents and military personnel to “gum up the works.” You don't have to blow the whistle. Do what you can to slow down the Deep State. Delete files. Change critical information. Block their projects. There are many things that each insider can do.

Included in this log are pictures of my hands and feet, which were subjected to intense microwave attacks and sent me to the emergency room. It also documents the repeated intense attacks on my heart. This generally involves a “machine gun” microwave pulse that originates from a satellite microwave weapon, called a Vircator.

This log should be viewed as an example of what a Targeted Individual might experience. Some TI's have experienced more and some experience less. Some receive little or no microwave attacks, but are subjected to intense gangstalking. This is all part of the variation in the “experiment.” Under Article 32 of the Geneva Conventions, conducting such experiments is a War Crime, and is punishable by the death penalty. Rule 92 of the International Humanitarian Law also states that medical and scientific experiments, or torture of civilians is a serious crime that may be prosecuted by the International Criminal Court (ICC).

In my opinion, the wealthy Rockefeller family and the Council on Foreign Relations (CFR) are directing and funding these War Crimes, under the CIA. There is significant research to back this up, including the statements of Congressman Larry McDonald, Senator Daniel Inouye, and Congressman Louis McFadden. The statements of these representatives are included, which implicate the Rockefellers.