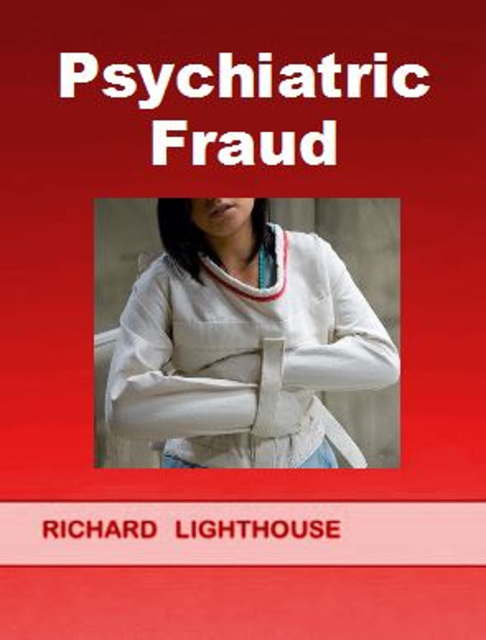 SKU: 9781370766512
$0.00
Unavailable
per item
The United States Government and the Deep State are using the fraudulent Psychiatric system in this country to abuse the rights of citizens. This is being done to silence dissent, critics of government policy, and whistleblowers. There are numerous examples of individuals being forcibly confined to a mental hospital, when their only offense was challenging government corruption. The Diagnostic Symptoms Manual (DSM-5) has been substantially revised to include fake diseases for all kinds bogus symptoms, making it easier to silence critics and whistleblowers. This latest revision to the DSM-5 was a carefully orchestrated government exercise, that was done under secrecy and a lack of transparency, which many doctors have complained about.

This fraud is relevant to Targeted Individuals because to maintain the torture program, the CIA must convince the public that TI's are mentally unstable.

Psychiatric diagnosis of mental disorders is a fraud. There are no chemical tests, no laboratory tests, no definitive blood, saliva, hair, brain, or genetic tests. No brain scan. No MRI. No CAT scan that can define mental illness. It is not objective. It is not scientific. It is fraud.

Some quotes from respected doctors:

Dr. Allen Frances, M.D., “There is no definition of a mental disorder. It’s bullshit. I mean, you just can’t define it.”

Neurologist Fred A. Baughman, M.D., "There is no such thing whatsoever as a psychiatric or psychological disease."

British psychiatrist Dr Joanna Moncrieff, M.D.; "There is just absolutely no evidence that anyone with any mental disorder has a chemical imbalance of any sort...absolutely none."

Psychiatrist Dr David Kaiser, M.D., "Modern psychiatry has yet to convincingly prove the genetic/biologic cause of any single mental illness."

Dr Elliot S. Valenstein, Ph.D., Professor Emeritus of Psychology and Neuroscience at the University of Michigan, "Contrary to what is often claimed, no biochemical, anatomical, or functional signs have been found that reliably distinguish the brains of mental patients."

Dr Thomas R. Insel, M.D., Director of the National Institute of Mental Health (NIMH), “The weakness” [of the DSM-5] “is its lack of validity….Unlike our definitions of ischemic heart disease, lymphoma, or AIDS, the DSM diagnoses are based on a consensus about clusters of clinical symptoms, not any objective laboratory measure.”

Dr. Thomas Szasz, M.D., from his book “Psychiatry: The Science of Lies,” "The assertion rests on an erroneous premise, namely, that the doctors were interested in distinguishing insane inmates properly committed from sane inmates falsely detained. The whole history of psychiatry belies this assumption. ... each time experience was consulted, it showed that the experts were unable to distinguish the sane from the insane".

If no abnormality of the body can be found, no disease or illness can be known to exist. Unproved theories about etiology, pathology and prognosis are pure speculation. This is why so many doctors are opposed to psychiatry and its labeling of mental diseases, according to the DSM. If the disease cannot be detected using objective, scientific means – then it cannot be proven to exist.

Science is objective and repeatable. It does involve opinions or voting. It is not subjective.
Psychiatric diagnosis of mental disorders is a fraud.
Stopshrinks.org
antipsychiatry.org