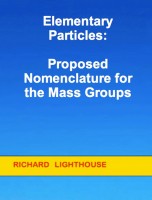 This short technical ebook presents a proposed naming convention for the elementary particles in all of the Mass Groups. This system should make it simpler to discuss individual particles and their properties. For example, “Clara21” indicates Mass Group 2, the 4th particle mass, the second charge type, and the first spin type. 64 particle masses in 16 mass groups are shown with their respective names in a complete Periodic Table for Elementary Particles. This table represents a total of 1024 elementary particles. This new table explains dark matter as the heavyweight counterparts of protons and neutrons. For example, the proton is made of 2 up quarks and 1 down quark. The heavyweight counterpart of the proton is made of 2 Sup quarks and 1 Sdown quark. This implies a heavy counterpart for the photon, which is called the Photini particle. It is a new form of light - "Heavy Light." This also represents the correct model for supersymmetry.