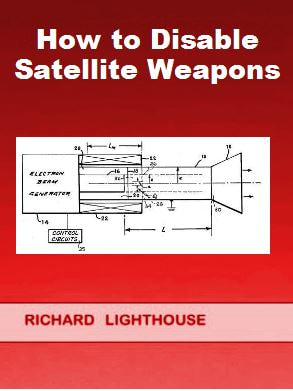 How to Disable Satellite Weapons

Rev 1B - This short ebook describes the basic ideas for disabling a satellite from the ground. By inducing resonant vibration in the satellite, it makes it difficult or impossible to use the satellite weapon system. Almost every satellite in orbit is vulnerable to the microwave beams that are described in this document, and this can be done very inexpensively. Satellites all around the world are being used to attack civilians and invade their rights. The U.S. Air Force Space Command at Schriever Air Force Base, operates hundreds of satellites with weapons. According to one Air Force Sargent, they operate 7 satellite constellations with 9 different weapon systems. Each one of these satellite weapons depends on a stable, quiet, and still platform. Resonant vibration can be induced into the satellite using a inexpensive ground-based microwave cannon, or a Vircator-type system. Resonant frequencies for the satellite frame are typically around 10 Hz to 50 Hz, which can be induced by pulsing the ground-based microwave system. Or alternately, the fuel tank resonant frequency of 5,000 to 25,000 Hz can be induced by using two separate frequency sources from the ground, that are differentially tuned to the fuel tank resonant frequency. The solar panels are another option that can be exploited to disable the satellite, and cause it to consume all of its fuel. Most satellites have no defense against this type of countermeasure. Instar Engineering recommends testing the completed satellite at 20 Hz to 2000 Hz, for resonant frequencies.

An alternate system that is more expensive, but more reliable as a countermeasure – is to target an area of the sky, such as a cluster of satellites, and use a directed energy weapon (DEW) that pulses and sweeps a certain signal range, such as 10 Hz to 50 Hz, pulsing the microwaves. This would reasonably guarantee that the satellite frames were vibrating. It would require a much larger ground system and expend more energy, but it would not require any precise pointing system.

It is the opinion of this author, that the Air Force's primary satellite weapons are stationed on the GPS satellites that operate in Mid-Earth Orbits (MEO); this includes the latest Iridium satellite constellation. These satellites have a 12 hour orbital period, and move slowly across the sky, making them easy targets. See the maps on www.In-The-Sky.org